Schnauzers are probably most widely known for their appearance in the Disney movie “Lady and the Tramp” – trouble maker Tramp is none other than a Schnauzer. But don’t be fooled, they aren’t all trouble makers.

They are intelligent, spirited creatures originally from Germany. Schnauzer comes from a word that means snout or moustache in German, which is fitting for their most endearing characteristic – their long beautiful mustache & beard. 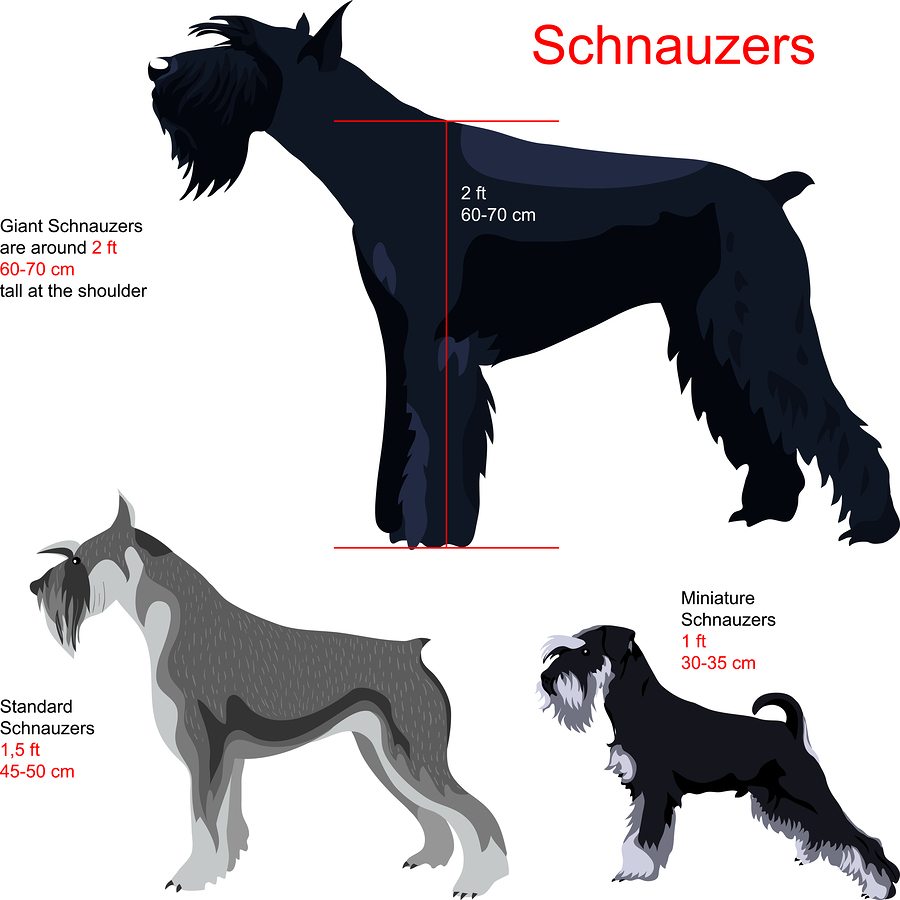 Standard  Schnauzers are a working dog, originally ratters and guard dogs. They are typically between 18 and 20 inches tall, and weigh in between 31 and 44 pounds. They are a clever breed, high-spirited, and as such can be a very demanding breed. Both the Mini and Giant Schnauzers originate from the Standard.

Miniature Schnauzers are a result of careful breeding of the original Standard Schnauzer and other breeds like the Poodle and Affenpinscher (Monkey Terrier). They are typically between 12 and 14 inches tall, and will weigh in between 14 and 20 pounds. They are very loyal and affectionate dogs. They crave the attention and love of their owners – the perfect lap dog. They can be trouble makers, but ultimately want commands and direction from their master.

Giant Schnauzers are a breeding results of the Standard Schnauzer and other breeds like Standard Poodle, Great Danes, German Shepherds, Rottweiler, Doberman, and Bouvier des Flandres. They are typically 2 foot tall, and weigh in between 55 and 80 pounds. Don’t let their lineage scare you. They were originally bred as a working dog – to drive livestock or guard the farm. Let’s face it though, a lot of people don’t have a farm. Because of that they need a lot of exercise and a job to do. They have a strong attachment to their owners and are very much a 80+ pound lap dog. They are very emotional creatures that aim to please, and strong desire for companionship.